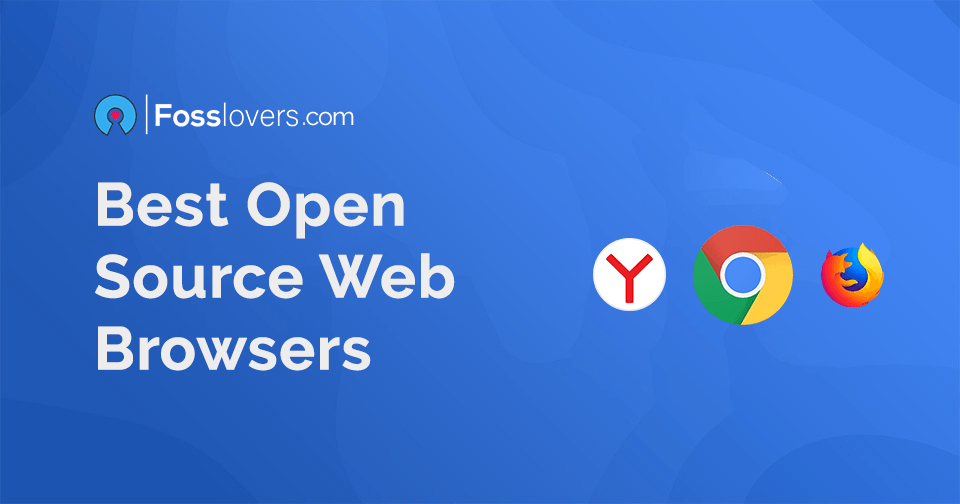 What do we use to browse the Internet? Most of us will answer Chrome, Firefox, Opera, Safari, Edge, etc. Yes, that’s normal. But, what’s the term that defines all these examples single-handedly? They are known as Web Browsers.

A web browser is a software that allows a user to surf the Internet (what we call ‘The Web’). We use Chrome, Firefox, Safari, etc. to browse the Internet because they are widely used and they are the most popular web browsers in recent times. But, how were these web browsers built? To know how these were built, we need to go through their source codes and find out their working procedures. But, can we find their source codes? Yes, but not in all cases. We can find the source code of Firefox only among those examples of web browsers. Why is it so? Why can’t we find the source code of Chrome and Safari?

Yes, we are going to discuss the best open-source web browsers in recent times (i.e. in 2018) in today’s article.

The list isn’t in order, because no browser can be considered “the best among all”. But still, we have tried to put the web browsers in terms of the number of users and popularity and positive reviews.

The Best Open-Source Web Browsers of 2018

Firefox is the most popular open-source web browser of all time and also of 2018. It’s available for a wide number of Operating Systems such as Microsoft Windows, Linux, OS X, Solaris, Android, and iOS. Firefox was developed by Mozilla Foundation [ Moz://a ] and it’s subsidiary, Mozilla Corporation. Firefox was built on C++, JavaScript, C, CSS, XUL, XBL and it was released under MPL2.0 License.

Since the introduction of this powerful browser, it has been successful to receive many positive reviews due to its speed and security. It’s also considered as the ‘sequel’ of the first commercial web browser, Netscape Navigator. It uses the Gecko engine developed by Mozilla in all the platforms except the iOS version which doesn’t use the Gecko engine. Here’s a quick overview of this world’s most popular open-source web browser:

This name sounds similar, and it is not only similar, but it’s nearly the same as Google Chrome. Fulfilling the list of best open-source web browsers without Firefox and Chromium is like listing the list of wild animals without lion and elephant.

Chromium is like a sister of Chrome. Google started the Chromium project to provide the source code of the world’s most popular web browser, Google Chrome. But, Chromium doesn’t provide the full source code of Chrome. Most of Chrome’s source code is still proprietary and closed. Chromium uses the Blink engine, the same web engine used by Chrome after its version 27. You can install the extensions (add-ons) made for Chrome on Chromium too. Even though there’s very little difference between Chromium and Chrome, we shouldn’t forget that Chromium doesn’t have a stable release because it’s always under development.

You can download find more about the Chromium project here: https://www.chromium.org/.

Midori is an open-source web browser developed by Christian Dywan and Nancy Runge. It’s a lightweight web browser that uses the Webkit rendering engine and the GTK+ 2 and GTK+ 3 interface. It’s a part of the Xfce desktop environment’s Goodies component and it was developed to work with Xfce’s principle to make the most out of available resources. It was written in Vala and C languages. It’s best known for its speed and customizable interface.

Some of the best features available in the Midori web browser are listed below:

Konqueror is a free and open-source web browser developed by KDE. It acts as a file management software as well and provides web access and file viewing functionality for file systems. It’s a core part of the KDE Software Compilation written in C++ and Qt framework.

When Konqueror was released, there were only two competitors in the web browsing software world and they were Netscape Navigator and Microsoft’s Internet Explorer. Hence, it echoes a colonization paradigm that states like this, “First comes to the Navigator, then Explorer, and then the Konqueror”. It also follows the general naming structure of KDE software because its name starts with the letter K. It uses KHTML as the web-rendering engine.

The major features of this web browser are:

It’s also available in the embedded system’s version, but only as a web browser and without file management support. It’s embedded systems version is known as “Konqueror Embedded”.

Falkon is a popular open-source web browser originally developed by David Rosca and owned by the QupZilla Community. It is built on the Qt Web Engine. It’s available for a vast range of operating systems such as Microsoft Windows, Linux (Ubuntu, Fedora, Arch Linux, open SUSE, Debian, etc.), Mac OS X, OS/2, and Free BSD. It was written in C++ and uses the Qt cross-platform application framework.

Formerly known as QupZilla Browser, Falkon is reported by many people to consume very fewer system resources unlike popular web browsers like Chrome and Firefox. It acts as a wrapper for the Chromium browser core. It was written in C++.

Some of the major features of this browser are:

Here’s a quick overview of this list in terms of various aspects so that you can choose the best that meets your requirements.

So, If you have any questions, suggestions, feedback please write them in the comment box below so that we can improve or update our contents. Thank you! Enjoy

Suggested For You: “Best FOSS Alternatives 2018”